Icing on the Cake, By Frank Powell

Working on a script over the past months, I have been impressed that WMRS is a relatively unique field station in several ways. A major difference is that we don't own or manage a specific plot of land like most stations, for exampl the UC Natural Reserve System stations.

Instead, we operate on a special use permit in the Inyo National Forest and attract researchers working anywhere between our Owens Valley Lab and the Summit Lab. This 10,000 foot altitude transect provides amazing opportunities for comparative studies in ecology and environmental science. To cover the range of ecosystems at low altitude, a researcher would have to study a transect from the deserts of Southern California to the tundra in Alaska. Yet at WMRS, this is possible over only 20 miles as the crow flies. 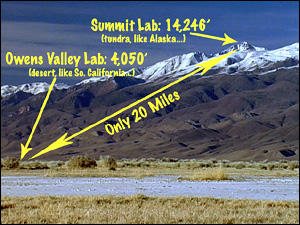 At White Mountain Research Station you can go from the desert to Alpine tundra in a few hours drive, an important asset for researchers.

Such geographic and ecological diversity is a double-edged sword, however. The main challenge with such breadth is collecting data for any one of these systems with sufficient depth. Extensive data sets, especially those covering long periods of time, are an important asset of a field station. To build these data sets, I have been working with the WMRS Advisory Committee in recent years to define some standard transects around the station. Naturally, everyone had their favorite proposal for a transect depending on their own research. But a solution finally presented itself at the recent Mountain Climate Sciences Symposium. Here, we were introduced to a program that could focus research in these various ecosystems at WMRS--the "Global Observation Research Initiative in Alpine Environments", or GLORIA.

The basic requirements for a GLORIA site are monitoring changes in plant diversity every five years on four summits of different altitudes in a local mountain range. This is easily accomplished at WMRS, so we quickly committed WMRS to participate in GLORIA, in cooperation with the US Forest Service. 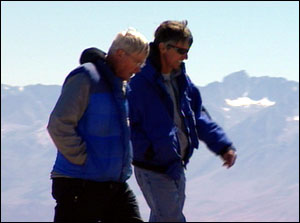 With the Sierra Nevada's Palisade glacier in the distance, John Smiley (l), ecologist and Associate Director of White Mountain Research Station and Frank Powell discuss plans for the GLORIA site near the summit of White Mountain.

As WMRS Associate Director John Smiley and I hiked White Mountain and worked on our script for the documentary, an idea to make the White Mountains more than just an "average" GLORIA site began to crystallize. Standing on our highest GLORIA site, we could see the antennae for our wireless Internet system on the Summit Lab. Soon we hatched a plan for transmitting detailed information about the microclimate at the site so it would be available on-line any time of the year. We could even use a remote video camera to monitor how animals use the site. The advanced technology at WMRS would enable us to make the GLORIA sites in the White Mountains into "master sites", providing detailed environmental data to researchers around the world.

In the Shadow of White Mountain helps explain why environmental data from a peak like White Mountain is important in understanding the effects of global climate change, and how the station can help to be an "early warning" system for the consequences of climate change to our planet and society. 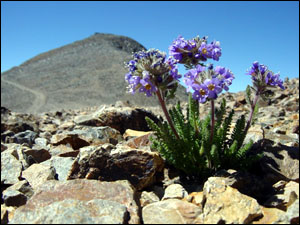 Skypilots, one of many alpine flowers still found just below the summit of White Mountain. Their fate--and ours--is the focus of the GLORIA project.

This is just another example of the unique research made possible by a field station, especially a station with such diverse resources and infrastructure as WMRS. If this video helps people understand the value of field stations for doing environmental research, and appreciate the relevance of this science to their lives and the future of the planet, it will be the icing on the cake of the new projects we designed while preparing our script.