Wisdom From the Ancients

When walking over the gleaming white dolomite of Patriarch Grove, or other precambrian meta-sedimentary rocks elsewhere in these mountains, the sense of any time is abstract, crudely distilled through the filter of one's rudimentary geological understanding (unless you're a geologist). 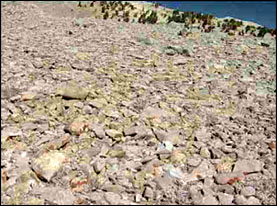 The Reed Dolomite in which the Bristlecones grow is the metamorphosed remnant of pre-cambrian oceanic deposits.

With more apologies to geologists everywhere--rocks are old. Their age is so abstract--as abstract as the distances between the planets and stars--that it takes a geologist to help one grasp how old they are. Thus it is hard to grasp the idea of time in the rocks--because it is so far removed from our experience (unless you're a geologist).

But here something can immediately put one in touch with the past. The Bristlecone Pine. 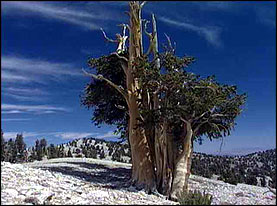 You can see this Bristlecone near the entrance to Patriarch Grove.

Apparently, most of the Bristlecones encountered here are around 1500 years old--give or take a few years here and there. But then there are those that are 3 and 4 thousand years old--or older. You don't know which ones, and that's only to protect them from that distinctly crude lifeform--the vandal. But they are there, and there they are--still standing in the same place they were 3 or 4 millennia ago. But I don't think millennia is the right word to use here. 3 or 4 millennia makes it seem like, well, 3 or 4.

With Bristlecones I like to think that they have been around to see humans go from using stone tools to overcoming the strong nuclear force and unleashing the atom; from chipping pictographs on rocks to Gutenberg moving his type to storing the Library of Congress on a tiny chip of silicon. They have been there while the Roman Empire rose and fell and the Dodo vanished. And those are just the living ones...

On a hill above Patriarch grove, reaching skyward like angular spires, or lying hither and there with roots still tenaciously grasping chunks of the dolomite they were borne into and died in--are relic trees. 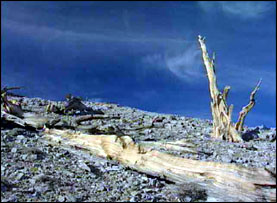 Relic trees, dead for over 4,000 years occupy a hillside high above Patriarch Grove.

A relic maintains its hold on a chunk of dolomite it began growing in when the last bits of the ice-age disappeared from the continent...

These are the remains of trees that started growing up to 4 thousand years before the oldest trees in today's groves were "born". That makes them at least 4, and perhaps 8 thousand years old.

This is where a sense of past time loses its abstraction--because here you can touch it. It's not like picking up a piece of shale, or the dolomite that they grow in. Here, time is in the wood. These relics still feel like trees--every grain and texture remains looking very much as alive as the living Bristlecones, except for the lack of any green growth. 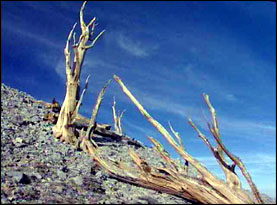 Sentinels from the past above Patriarch Grove.

And then, as you sit next to these relics and gaze out, you survey the same scope of landscape as they did thousands of years ago. It's not like being able to say some unknown hunter may have once been here. That relic still stands next to you as it did maybe 8 thousand years ago. What did it survey? The landforms look much as they did then, but what innumerable flocks of birds flew overhead? What countless herds of animals roamed and grazed those rolling hillsides to the south?

Then it might strike you--both the ephemeral and unchanging. How the grandest civilizations of man have risen and vanished, how species have disappeared, and how through all of it, these timeless sentinels, like the dolomite they root in, remain. But what they can fill one's imagination with may be less stunning than what their lives may tell us in the coming years.

As Phil Rundel explains in In the Shadow of White Mountain, the relics died by the end of a period of maximum warming that lasted about 4 thousand years (The Holocene Epoch). It was a period that forced the glacial remnants of the last ice-age to vanish forever, and caused the seas to rise to their present levels. But not since then have the Bristelcones grown here. 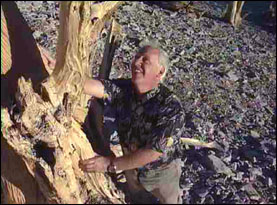 Except that is, for the last 50 to 100 years... As Phil explains, something interesting is happening here. And it may have something important to tell us. 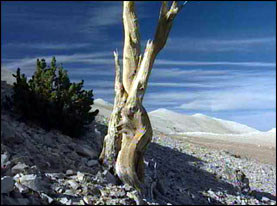 A young Bristlecone (L), perhaps a hundred years old growing in the relic grove near a Bristlecone that lived 4 to 8 thousand years ago...
If it were my guess, the Bristlecones will be seeing whatever is happening through--for these mountains--and the Bristlecone's special place in them are timeless...no matter what it means to the ephemera that we call humanity.