Spirits of the Highlands

As you may recall from The Big White Blind, the account of how we captured footage of Bighorn Sheep in the eastern Sierra, biologist John Wehausen surmised that the Bighorns rely on their keen vision and steep, inaccessible terrain for protection.

During preparations to interview UC Davis anthropologist Robert Bettinger about ecosystem change, he explained how Native American hunters would take advantage of this when hunting Bighorn in what was once the bunchgrass steppe of the White Mountains. 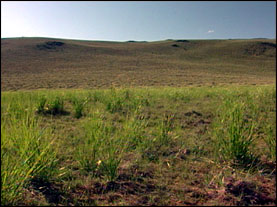 Bunchgrass, a favorite forage of Bighorn sheep near the entrance to Shulman Grove above 10,000 feet in the White Mountains.

In these wide-open grasslands, the Bighorn did not have quick access to vertical escape, their preferred method of protection. But they could not resist the overwhelming abundance found in these meadows. Thus, they relied on their sharp vision and would avoid anything that looked out of place amongst the visual inventory of the wide-open landscape they surveyed.

So, as Robert explained, the indigenous hunters would erect decoys. These decoys were nothing more than grass bound up into a vaguely human-sized sheaf, or maybe a pile of rocks.

One might wonder how that would work, but if you go and sit in these highlands and carefully look around you, it becomes more apparent. With crystal clear air and expansive horizons the vistas can be endless. 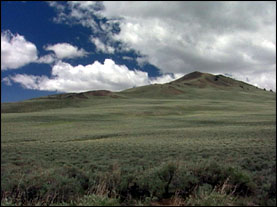 The landscape at Big Prospector meadow, an area where the ancient inhabitants hunted Bighorn Sheep.

Even with human vision, small shapes on what appears to be a nearby hillside are actually Bristlecone Pines that are miles away. A puff of dust betrays a distant vehicle that doesn't come near for 10 or 20 minutes. Colors and contrast are brilliant, and horizons are clearly defined against bright skies. Experiencing these conditions, one can better understand how a pile of rocks or a bundle of grass could be employed to the hunter's advantage.

So, as Robert described, the hunters would erect their decoys and then lie in wait in strategic positions. They then conducted a kind of "drive". These sorts of drives were ideally conducted in slow motion--not in a fast, hectic charge so often seen in depictions of the wild-west frontier--where things can quickly get out of hand when sheep panic and do the unexpected. In general, the hunters would start moving slowly toward the sheep, and the sheep would slowly move away. The sheep would then either move gradually toward their escape route, where a hunter was waiting in a blind, or in another direction, where their way would be blocked by a hunter or a decoy, causing them to move slowly in another direction. The whole idea was to keep the sheep walking--or at most trotting--not charging pell mell over the landscape, it being much easier to hit a slow-moving rather than fast-moving target.

A far cry from dispatching game with a supersonic bullet and telescopic sight. Even so, this method ensured that amongst all big-game ever hunted by the native Americans here, the Bighorn Sheep was far and away the greatest source of big-game sustenance.

A Petroglyph of a Bighorn from south of the White-Inyo Mountains attests to the longevity of the indigenous people's relation to this resource. (Photo: Jeff Sahagun, Palomar College Anthropology Club) 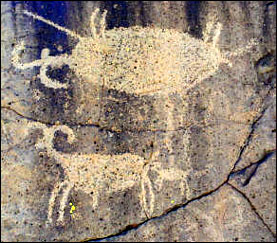 This resource continued to sustain and enrich the Paiute-Shoshone for thousands of years--that is, until contact with Euro-Americans just a few hundred years ago. Then, as Robert explains in In the Shadow of White Mountain, a drastic change in the ecosystem soon followed.