Called the "the bravest of the Sierra Mountaineers" by John Muir, the sight of Sierra Bighorn Sheep drifting like wind-borne tufts of white fur up incomprehensibly sheer walls of rock is truly awe inspiring and always mind-boggling. The question this sight always elicits is "how do they do that?" It is one of those wonders of nature that while science can proffer confident explanation, one still takes pause to wonder. And it is a wonder of nature that stands at the brink of vanishing forever. 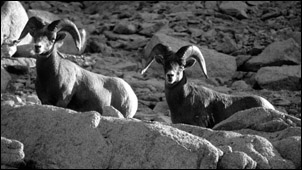 For over 3 decades John Wehausen has struggled to save this natural wonder, and has ultimately come to manage their recovery program.

A founder of the Sierra Nevada Bighorn Sheep Foundation, he has tracked, trailed, photographed, identified, recorded and otherwise watched every change through every season that has taken place amongst the last dwindling groups--once called herds--of Sierra Bighorn Sheep.

In a wide variety of different efforts he has marshaled dogs, helicopters, horses, mules, airplanes, telescopes, and radio-tracking devices. He has wandered the loftiest and most rugged of these mountains on foot for days on end, alone, through blinding snow and stinging ice. He has watched the newborns in their first romps and witnessed his charges attacked by predators. He has lured and trapped and meticulously counted endlessly year after year with the sole purpose of trying to keep the sheep, and their genetic record, intact.

In the Shadow of White Mountain will explore how John uses a new tool in these efforts--molecules. With new equipment made possible by funding from the National Science Foundation at facilities provided by White Mountain Research Station, John has immediate access to an indelible molecular tracking "device"--genetic alleles.

Over many years of intensive trial and testing John and his colleague Rob Ramey have developed a technique for reliably retrieving, processing, typing and recording the variations in genetic material in the sheep. And with the new facilities at White Mountain Research Station, John has almost immediate access to the information that the genetic material can provide. Why is this molecular material so important? It helps John track and monitor an ever-present threat--the loss of genetic diversity.

In the Shadow of White Mountain explores why preserving this diversity is critical, and how John goes from the field to the lab to reveal the information locked within the precious evidence he retrieves from the sheep--their droppings. It also reveals how John has been forced to consider a provocative theory about the root cause of ecosystem change that beleaguers the sheep.

What Will Be Saved? 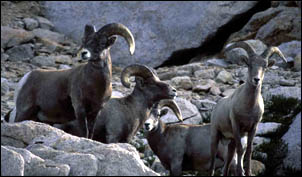 The natural history of the Sierra Nevada Bighorn Sheep reaches back to the last great ice age. Saving the sheep not only saves a majestic symbol of the land they inhabit, it preserves an irreplaceable reservoir of evolutionary data from the distant past.

When the high latitudes of the North American continent were buried under miles of ice, this same animal roamed a land that includes what we now call the Sierra Nevada.

Back then, what are now nearby deserts resembled the boreal habitat of present-day British Columbia. Immense lakes covered now parched plains, and the sheep shared the land with creatures that have since vanished into history. Learn more about North America during the Ice Age

Roaming herds of Mammoth and Mastodon, huge Condors that graced the skies, gigantic Bobcats, the massive Cave Lion or the immense Short-Faced Bear, the American Cheetah, the aptly named Smilodon or Saber tooth Cat, and Camels.

Sometime later, a smaller but ingenious creature came along--humans. Bands of hunter-gathering people prized both the sustenance the sheep provided, and the power that their elusive climbing spirit brought to the hunter.

After enduring the retreat of glaciers, the withering of immense lakes and outliving an entire menagerie of prehistoric creatures, the Sierra Nevada Bighorn Sheep sheep has, in just the last two hundred years, come to face the ultimate adversary--extinction.

Hopefully, science and the perseverance of biologists and scientists like John Wehausen will prevail, and the sight of Bighorns in the Sierra will be one to behold in the future.